Koole Terminals has a first in Rotterdam port

Inspecting sites with a drone? That sounds innovative. But if that drone can do that all by itself, that’s revolutionary. Koole Terminals has the scoop at its tank storage site in the Botlek: the first autonomously operating, industry-grade drone in the port of Rotterdam.

Marc Hordijk, Manager of Process Excellence and Innovation, sees a bright future in working with such smart drones. “This is just the beginning,” he says.

The pilot will last until September 2023.

Extremely safe
During the pilot, both drone and human remain active. This period is to test whether everything works properly, such as finding out how much time it takes before a report comes in, because that too is fully automatic. The drone has an ordinary camera and a thermal camera on board.

“The pilot period helps us discover which camera angle is ideal, and which flight altitude. The drone now flies between 35 and 50 meters in altitude. That is the safest level for horizontal movement of autonomous drones, because at that height there are no obstacles, nor is there risk of the presence of other air traffic.”

No humans involved
The autonomous drone, a drone-in-a-box system from Percepto, has its own housing from which the high-tech machine makes its flights. In this cylindrical, waterproof structure, the drone charges up, exchanges images with the “control room,” and flies its rounds from there. Everything is wireless and fully automatic, including opening and closing the housing. There are no humans involved. The operation of the drone depends on Falcker’s software. This system integrator provides technical support and joins Koole in constantly refining the drone’s functionality.

“We look for the limits”
The primary purpose of this drone pilot is to recognize leaks of liquid products that Koole stores and transships. Falcker is a reseller of the drone and provides the software it uses to train the drone. That software compares images, making the drone smarter and smarter, a cutting-edge feat of artificial intelligence.

“We are pushing the limits of what is possible with the drone. First, in recognizing those spills. Because a puddle can also be rainwater. Can we go so far as to recognize even drops as spills? Second, until when is it effective to fly the drone? Does it still do its job well in less-than-perfect weather conditions? The weather in the port of Rotterdam is changeable, so within this project we are finding out what the operational deployability is, within the predetermined safety margins.”

Images visible immediately
Under applicable laws and regulations, Koole is required to check the entire installation for leaks several times per day. The drone flies when a ship docks and when a product is being pumped. This information is fully integrated into the terminal’s route-control system. Supported by this control system, the drone flies preset routes. In addition, the drone flies at frequent intervals for standard checks.

“The latter happens every four hours. The images collected by the drone are visible live in flight in the control room, a kind of control tower. These are still lower-resolution images. The very highest resolution images come in after the drone lands and exchanges them with us from its box.”

“This is just the beginning”

Important role for drone
“In the end, the system has to work for you. That is what everything is focused on. One of the challenges is that this advanced technology is ahead of current laws and regulations. We have to deal with the airspace of Rotterdam The Hague Airport, but also with requirements from the Port of Rotterdam. These each have their own rules, so we are working hard with Falcker to navigate them and be ahead of the curve with that too.”

Falcker has a lot of experience with drone applications, but working with an autonomously flying drone is new for them too.

Duco Boer is Chief Digital Officer at Falcker: “Recently we managed to lay the foundation for autonomous flying with the Percepto hardware and the necessary changes in legislation. Together with Koole, we want to make this a success by validating and improving spill detection. We are early adopters of a technology that is developing rapidly.”

According to Hordijk, there are more application possibilities for the drone in the near future: “We see possibilities in the field for measuring emissions, wall thicknesses and corrosion, for example. But the drone can also play an important role in security and emergency situations.” 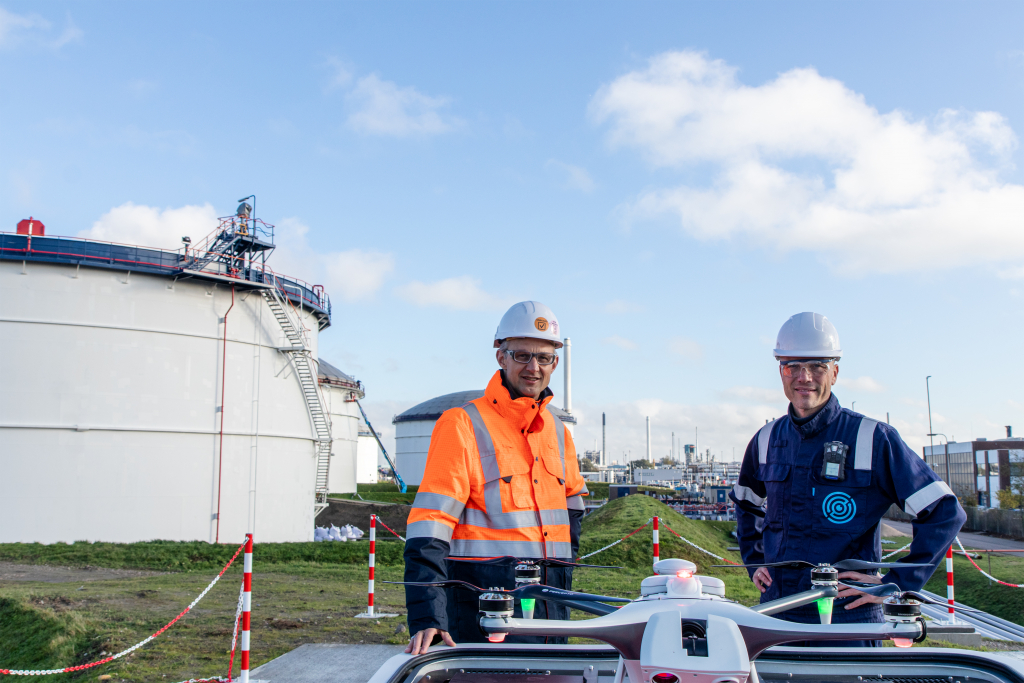 Back to overview
Copyright 2023 Koole Terminals all rights reserved. Manage cookie settings.
We use cookies on our website to give you the most relevant experience by remembering your preferences and repeat visits. By clicking “Accept All”, you consent to the use of ALL the cookies. However, you may visit "Cookie Settings" to provide a controlled consent.
Cookie SettingsAccept All
Manage cookie settings.